Believe it or not, GivingTuesday is only a few months away. This special giving holiday deserves the same careful planning and attention to detail that you give to your end of year fundraising appeal. That means you’ll need to begin planning early! This year, GivingTuesday falls on Tuesday, November 28.

Think of GivingTuesday as a way to create and expand your donor relationships. It’s a campaign that can turn your prospects into donors and your donors into brand ambassadors.

First things first—you’ll need to get your message out to potential donors. Studies have shown that your audience needs a minimum of 5–7 communications before they respond. You might feel like a broken record this fall, especially in November, but don’t worry about overcommunicating your campaign. By the time you’re sick of hearing yourself, that’s when your audience is just starting to pay attention.

Once you have supporters, it’s important to turn them into ambassadors for your organization so they share with their network and encourage others to give too. After all, one of the most important parts of a successful crowdfunding campaign is about getting to your contacts’ contacts. Consistent communication via email, social media and any other means that will resonate with your audience is crucial in order to reach your goal.

Now that you have the mindset of what you’re setting out to achieve, let’s talk about five marketing communications tips to make your GivingTuesday campaign a success!

1. Look for reasons to be in touch so you aren’t just asking for money.

While the ask is one of the most important parts of your campaign, it’s important that you’re doing more than simply asking for money. Instead, find other ways to communicate to keep your organization top of mind. Some of these reasons include:

2. Create a sense of urgency.

The time is now! You can potentially generate a flurry of giving with any or all of these suggestions:

3. Reach out to people personally.

Your donors want to feel valued for their support, which is why your communication can’t stop after your supporters donate. Send emails to folks you know would want to give. Then, once they give, thank them personally and be genuine in your response. You can also provide a blurb and campaign link to make it easy for your donor to share the good news—this is a quick way to get to your contacts’ contacts, like we mentioned earlier!

4. Send the word out over several channels.

You will likely rely heavily on email and social media to market your campaign,
but don’t forget that you have a whole toolkit of marketing channels. The earlier you plan a holistic campaign, the better chance you have of incorporating some show-stopping materials like:

Why wait until the end? Express your gratitude now! Once a person donates, say thank you. Even if they get an automatic receipt through your crowdfunding platform, send a personal note of appreciation and involve volunteers to help. Make sure that you’ve tested the automatic reply for donating and add a genuine, personal touch to the note so that your donor feels thanked in the meantime.

If you’re interested in creating a GivingTuesday campaign and end-of-year appeal that drives fundraising dollars and creates brand ambassadors for your organization, you’re in the right place! Our team can help set you up for success. Reach out today to get a head start on planning and tell us all about your goals for GivingTuesday and year-end donations.

I’m ready to get started 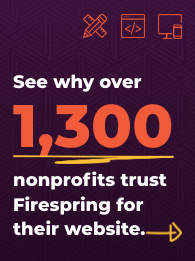 Stay in the know. Sign up to get monthly blog updates delivered to your inbox.