There are two things about Firespring that can’t be denied—we know our stuff, and we love what we do. Speaking to print in particular (I may be partial), life on the production floor isn’t just a job, it’s our passion. One we’re proud to say placed us at the head of the “quick and small commercial printers” pack in the U.S.

I’m astounded by the amount of experience on our team; nearly 1,000 years of combined experience spans just 40 individuals! Many of us have known and worked with each other for years. I wondered: Did my people discover print, or did print discover my people? I sat down with five of our most experienced print team members to find out. 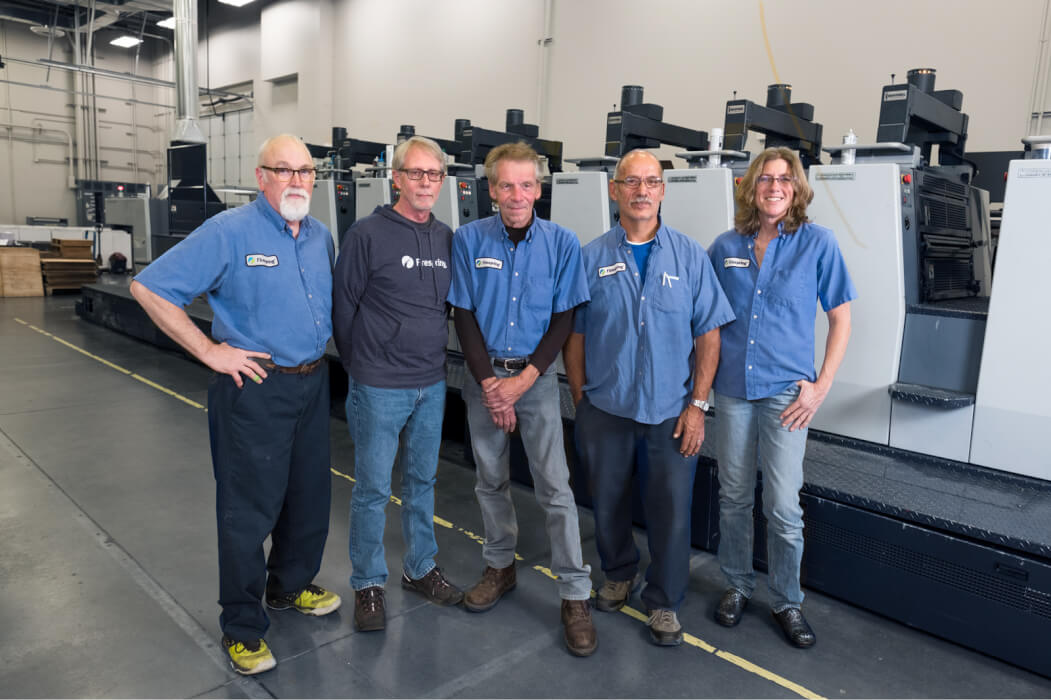 “Print really discovered me,” said Rob. For him, print truly is in his blood. His experience began as a family affair, at the age of 16. His pop owned a print shop and had lost two employees to the draft. Rob’s father marched into his school and said, “I need this boy in the afternoons—so, he can only go to school till noon. You guys work it out, or he’s dropping out.”

“Over the years, I became pretty good at it. There was no way I was going to do anything else because I started to excel. After a while, I was way beyond the skill level of my father. So, he fired me and said I needed to become more well-rounded. I needed to get a job at another plant, find out how they do things,” explained Rob.

This parental push turned out to be just what he needed to take his skillset to the next level—to learn the print business front to back. “At first I was pissed off about that, but then I understood he was very wise in doing so.”

Rob talks with his hands. I can’t help but notice they are stained black by years of handling ink. His passion for print is evident in every way. He says, “There’s never been a day since I’ve been doing this I have not wanted to come to work, or I dreaded going to work. It’s always been that I knew every day would be something different and be another adventure.” 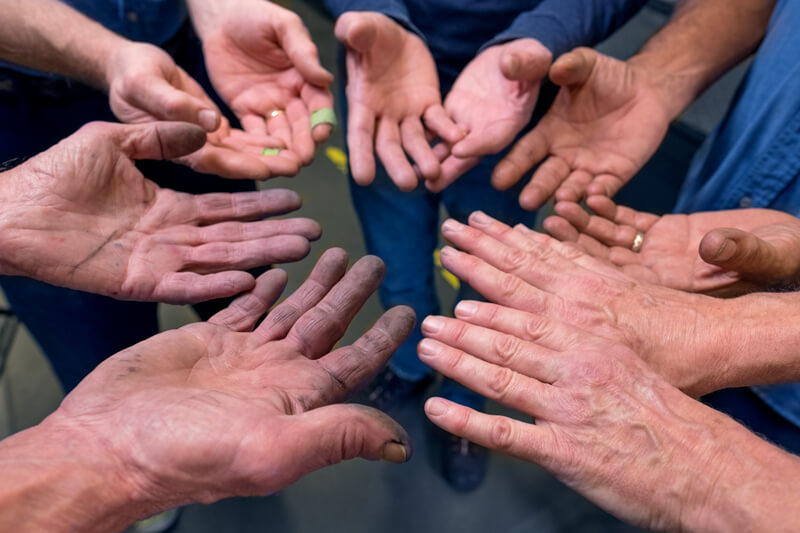 John shares how he discovered print: “I was in college and they had a little print shop, which I didn’t work in but I had them do a couple little things for me, pamphlets and stuff. After college, I moved back to Lincoln. There was a job at NBC Bank in the print department as a pressman. I just really prayed that this was an opportunity for me to be able to learn how to do this stuff, do some pamphlets maybe. I didn’t know.”

What John didn’t know then was he had prayed for a job that would become a lifelong career. “I learned how to strip film, make plates and run a printing press. I worked there for five years and found I really liked printing. And I did get to print some pamphlets too.”

Hundreds of pamphlets and a venture in owning his own print company later, John’s now on the daily grind at Firespring. “There are days when you can come back and I’m throwing wrenches and paper wondering why I got into this stinking business for,” John smiles. “But to start the job from the very beginning and then you have a product at the end that you can be proud of.” Now that’s something.

It seems that it was print that discovered Jim. You could even say he married into the industry. “My father-in-law and brothers-in-law (Mike Wallace and his twin) all worked at Boomers, and they kept telling me there’s someone who wouldn’t show up to work quite frequently, and to come and apply. Every time I did, supervisor said, ‘No, we’re not looking.’ One day, he finally took me in. That was in ‘85.

“It wasn’t something I was really looking to do, but I thought it was kind of neat. I like doing what I’m doing now. Machines are so much better than they used to be.”

Jim’s oldest son, Matt, who also works here as a press operator with 10 years of experience, and his youngest son, Timmy, also printed with him back in the day.

You can hear a father’s pride in Jim’s voice when he speaks to Matt’s skill. “He’s really good at what he does. He’s really, really good with color. He can run it (the Komori press) by himself.”

Jim recalls a time at the Boomer’s production facility when he was asked about the capabilities of a female production worker. “They asked me about Annie. I said, ‘Well, she knows how to run the machine.’ It was a nice step as opposed to, ‘No, it’s just a man’s job.’ If a person can do it, do it.”

When the guys talk about women in the industry, Annie sits up, calm but straighter, her look intense. “I never thought I shouldn’t be in there,” she said. “It never occurred me that it was all guys. In my whole career, I’ve only had one guy give me crap about it. I put him down. Never had another issue.”

If you know Annie, you know she’s the quiet, unassuming type who rarely seems unnerved. I chuckle to myself thinking about Annie “putting him down.” Go get ‘em girl.

Fred’s print experience lies in prepress—the graphic arts side of print. Without Fred, the other four have no images to print on their presses.

“I like to say I started this career BC, before computers,” Fred jokes. BC graphic art consisted of photographing images and line type, developing the film and then assembling the different film elements onto a page by hand. “We did a lot of work with big copy cameras, in dark rooms, contacting and proofing. Nothing like we have now,” Fred said. “We did a lot of film stripping. We were strippers, strippers who worked on light tables!”

Film work in print has been rendered unnecessary. “As desktop publishing came along, the film industry went in the tank. I started training myself, so to speak. I learned a lot about some of the software programs for graphic design, Adobe products, stuff like that.”

If you ask me, Fred’s experience is fascinating. Print has come a long way from hand placing pieces of film. Every day is a new day in the print world. It may look like the same thing, but there are unique variables to account for and problems to solve. Technology has evolved, and we have evolved with it, but we still know our old school tricks. At Firespring, print is more than just creating a product, it’s a mutual respect for our teammates. It’s the confidence that everyone here is the best at their job. Our connection to print is deeper than the ink stains on our hands, it’s in our hearts and our blood.

The first thing I asked Rob when he walked into our interview was, “What is it that you make every day?” A smirk crosses his face and he answers, “I make FM, F*@kin’ Magic.” I think that perfectly sums it up.